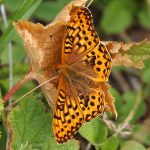 The Oregon silverspot butterfly is a medium-sized orange and brown butterfly with black veins and spots on the dorsal (upper) wing surface, and a yellow submarginal band and bright metallic silver spots on the ventral (under-side) wing surface. The historical range of this subspecies extends from the Long Beach Peninsula, Pacific County, Washington, south to Del Norte County, California, with populations restricted to the immediate coast, centered around salt-spray meadows, or within a few miles of the coastline in similar meadow-type habitat. Known populations occur on the Siuslaw National Forest in Tillamook County, Cascade Head, Bray Point, and Clatsop Plains in Oregon, on the Long Beach Peninsula in Washington, and in Del Norte County in California. The major limiting factors affecting this species are related primarily to the limitation of suitable habitat. Habitat destruction is unquestionably the reason for the threatened status of this butterfly today. It should be noted, however, that as colony size is reduced by habitat loss, restricted genetic variability and/or catastrophic events can ultimately cause the extinction of these small populations. In October 1980, the US Fish and Wildlife Service designated the Oregon silverspot butterfly as Threatened with critical habitat under the Endangered Species Act. A revised recovery plan was published in 2001. Text by USFWS. Photo by Peter Pearsall, USFWS.